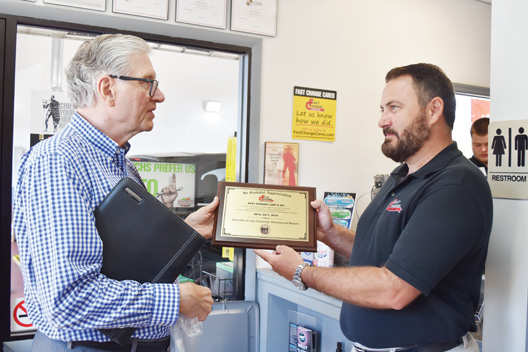 Military Missions recently awarded Fast Change Lube and Oil, with a location in Nicholasville, a plaque to show their appreciation in its efforts to help send care packages to troops overseas.
“Last year, we sent 8,500 care packages to deployed military personnel in all branches of service – Army, Navy, Air Force, Marines, and Coast Guard. Kevin Davis and the Fast Change Lube and Oil employees and customers played a large part in this accomplishment,” Karen Sparks, president of military missions said.
The organization is a non-profit completely run by volunteers. They work year-round to collect items to send in shoeboxes to armed men and woman overseas. Because the volunteers donate their time free of charge and all items collected are donated, the only cost the organization has is shipping. That is where Davis and his company comes in. Over the last three years, Fast Change Lube and Oil has donated $46,000 to help with the shipping costs for Military Missions.
“This year is going to be our biggest year ever, that is still my goal and we are pushing hard and hopefully we will have more donations as well as more items,” Davis said. “What we do is we have been putting cards and collection boxes in all stores. Anyone who comes in, we ask them if they would like to donate a dollar. Or they can bring items.”
Davis said through the organization anyone across the country can send a care package. His involvement with the organization started with the want to find a military non-profit that would give back and was in line with his company’s values. One key requirement was for the organization to make sure the majority of the donations went to the cause. Military Missions full filled that requirement and more, he said.
“(Our) third year we brought a team down and we packed boxes,” Davis said. “Once we did that, and our team got to see, then the next year they really got into it because they could read the letters of thank you. This is really genuine. That got our team a really good buy-in on it. We have been good partners since and we see this thing as hopefully rolling out nationally instead of just regionally.”
Items collected include candy (individually wrapped), snacks and drink mixes (single-serving size), canned items, personal care items and some miscellaneous items as well. Monetary donations are also excepted to help pay for postage or buy additional items. Or, other options are available as well such as adopting a hero or volunteering to help.
Whatever is donated that cannot fit in a box, the organizations work to make sure those items still make it to a veteran by donations at several centers across Kentucky, such as Thomson-Hood in Wilmore.
“Our customers are really doing the majority and what we do is at the end of the year I set a goal and I typically round it up,” Davis said. “Whatever we get, last year our goal was $30,000. This year I have set a goal for $50,000. Our team is really working hard and just trying to promote it.”
Davis said he is not a veteran, but he would not be able to do what he has the liberty to accomplish here in Central Kentucky if it were not for those who serve.
“I have never been in the military, it is just I get to do what I do because they do what they do,” Davis said. “I would not have the freedom to have my business and do the things I do, so I support our military. I am proud of them and we display the American flag. We give military discounts for veterans and we appreciate what they do.”
Although, many of the volunteers who help Military Missions are veterans. Such as those in attendance last week for the presentation, Fred Doster, a specialist five Vietnam veteran; Karen Weaver, major in the United States Air Force; Mark Roland, a colonel in the United States Air Force and Steve Blunk a major in the United States Army.  Donations also come from companies nationwide, such as socks from Skyline Socks in Washington and lip balm and sunscreen from Rodan+Fields who has donated close to $75,000 worth of products.
“We get a lot of donations and a lot of things that don’t fit into a little postage box,” Roland said. “We find a use for everything. If we can’t send it in a unit box then we will do things like supporting the veterans in our Hope Center in Lexington, volunteer services at the VA, Thomson-Hood in Wilmore. If it won’t go in a box and ship overseas, we will find somewhere to go to make that donation work and get it to a veteran.”
For more information visit www.military-missions.org