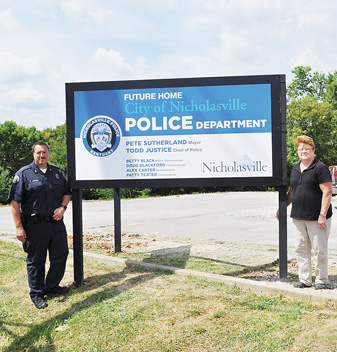 Last week showed the promise of a new beginning for the Nicholasville Police Department when a sign was installed at the future home of the departments new building set for completion in 2021.
“I am tremendously excited to be working with our police department to build a new state of the art police station,” Nicholasville Mayor Pete Sutherland said. “We have needed to do this for a long time.”
The new building will be built on the lot previously purchased for the new city hall. After the recession of 2008 – 2009 put the project on hold, Sutherland said the city weighed its need for a new police station and saw it far outweighed the need for a new city hall.
“The commissioners and I have been working toward this goal for many months but were making sure that we could afford to do the project and still have adequate financial resources for our other projects,” Sutherland said. “New projects such as the fire station in Brannon, our commitment to a $21 million sewer expansion and this police station are all the result of our efforts to raise revenue through sensible growth.”
The city budgeted $6 million for the new police station Nicholasville Police Chief Todd Justice said, and he is currently working to narrow down and pick an architect for the project hopefully the first week of September. After doing so, the project will go into the design phase and then out to bid. Justice said he would like to see ground broken in April or May of 2020.
“We are going to bring all the exterior stuff that we have, like code enforcement that is in city hall now, they will be coming in the building,” Justice said. “Any of our storage will come back into the building. We are going to have parking and all our special vehicles, signs and all that, we will have something out back where we can park out of weather.”
Justice said he would like to see the station be 20,000 square feet, although he does not know if that will be possible with the budgeted amount the city is setting aside. He has toured other recently built police stations with commissioner Betty Black in towns such as Berea, Versailles, Georgetown and Elizabethtown and is set to go to Ashland next week. Of all the stations he has visited so far, Justice likes the station in Georgetown the most and would like to model Nicholasville’s new station after it.
“I really liked it and they did theirs under that $6 million mark and that was two to three years ago,” Justice said. “Hopefully cost has not gone up that much, so we are in the ballpark. Theirs is around 17-18,000 square feet. If we get that we are fine.”
Previously discussed issues with police officer salary increases were also met by the Nicholasville City Commission with its new budget, Justice said.
“The commission and mayor have really worked with us,” Justice said. “We wanted to get more money. Over the next three years they told us they were going to evaluate the pay every year. They gave us .85 cents across the board (in a) raise and they are going to continue looking at doing it for the next three years.”
This, Justice said, will allow the department to be more competitive with other departments in the state. Although, the news of building a new station was met with some criticism. The recent problems with the Jessamine County Detention Center has been brought up since the police department posted pictures to Facebook.
Some citizens have commented and asked why the detention center is not being updated and the police department is.
“It is different, our elected officials only deal with city stuff,” Justice said. “That is not our area that is the county area. The jail is in bad shape and it needs some work.”
As for how all of these new projects will be paid for, Justice said the new police station and fire department will partially be paid with bonds and will not cost the city the full amount which is budgeted.
“It is a little bit different money, it is all not city money,” Justice said.
According to Laurie Young, finance director for the City of Nicholasville, the city is budgeting $10 million dollars in 20-year bonds to help finance multiple projects. Of this amount, the city plans to spend $4 million for the new fire station at Brannon Crossing, $4 million to refinance bonds issued in 2009 with a high interest rate and $2 million to help pay for the new police station. The bonds will have a tax-exempt interest rate which will make for better financing for the city, Young said.
“We have complained so long and this commission finally listened. This building has served its purpose, it is time to move on. We’ve got to keep up or the infrastructure will fall apart. If we don’t keep up, you will not get the services you are used to and we don’t want to get to a situation where we are taking two hours to get to a wreck because we don’t have the man power.”