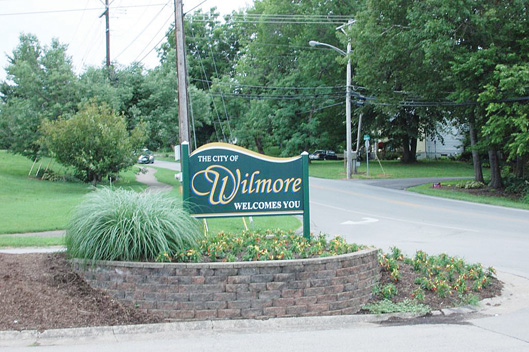 Wilmore City Council is starting back at the beginning of its litigation process for a nuisance ordinance pertaining to Thacker Drive after first discussing the problem almost one year ago.
On Aug. 5, Carl Perkins, Wilmore’s code enforcement officer told those present the case originally discussed late last August had been dismissed even though many present said the issue about a large amount of accumulation of items in the property’s yard is still ongoing.
After further discussion, it was found a case that was originally filed for 304 Thacker Drive also concerns items located at 306 Thacker Drive since the property is a duplex and is built on the same parcel.
“I can go there tomorrow and start a new case,” Perkins said. “We have to start from day one, a new case, 95 percent of my cases are resolved before they get to court.”
After the council voted to retire to closed session, the decision was made to reopen litigation for the property on Thacker Drive.
Brain Gotell and Heather Warren from Jessamine County Fiscal Court were also present representing the Commonwealth of Kentucky and a jury trial that is set for the property located on Maxey Street in Wilmore.
“Thacker Drive was dismissed a year ago,” Gotell said. “Nothing was refiled. When you file these complaints go through the district court system. Each person has all the rights a murder gets.”
Gotell addressed the city council and informed them garbage cases typically receive a dismissal from the court system if they are cleaned up.
“We do that because he can turn around the next day, if he gets a conviction, and get it dirty again,” Gotell said. “For a lot of these people it is an ongoing cycle.”
Both cases refer to KRS 381.770 which states, “it is unlawful for the owner, occupant or person having control or management of any land within a city, county or consolidated local government to permit a public nuisance, health hazard or source of filth to develop thereon through the accumulation of junked or wrecked automobiles, vehicles, machines, mobile or manufactured homes or rubbish and excessive growth of weeds.”
Warren said the case for Maxey Street is set for September, although over the last few weeks there has been improvements made on the property. Perkins, she said, has made a list of items to be cleaned up and turned it over to Dave Thomas who is working with the property owner on accomplishing each item on the list.
Warren said she can see the listed items being completed in a reasonable amount of time.
“If they are not making progress all they can do is impose a fine and that is not going to clean up the property,” Gotell said. “The best thing you can do is just get the property back in order. That is what we are working towards. David Thomas’ attorney is going to the property and getting started on some of those items.”
Once properties are cleaned up, Gotell said the Commonwealth wants to dismiss them and move on.
If the property begins to fall into disrepair again, the only option is to reopen a case, like what is currently taking place with the property located on Thacker Drive.
If the property owner does not clean up the property located on Maxey Street and he is convicted, Gotell said he will be fined possibly up to $6,000.
Henry Smith, who practices law in Nicholasville, was at the meeting representing the Jessamine and Wilmore planning and zoning committee, addressed the council as well and told those present when a complaint against a property owner is made it goes to Perkins who addresses the issue and if he finds a violation he notifies the owner to rectify the situation under a certain time frame.
“Brian is there to punish him, and Carl is there to fix it, or another way of punishing him,” Smith said. “It is sort of the same issue, but it is dealt with in two different worlds.”
In these cases, Smith said the owner is given three options: remedy the situation, take a penalty or possibly end up with both.
“We don’t throw up our hands we stay on these cases,” Gotell said.
“I think at the end of the day it is going to be cleaned up to satisfaction and we are not going to have to jury trial that case.”

Photo by by Olivia Mohr On Aug. 6, Jay Bruner, the president of the Jessamine County Fair board, presented Major... read more