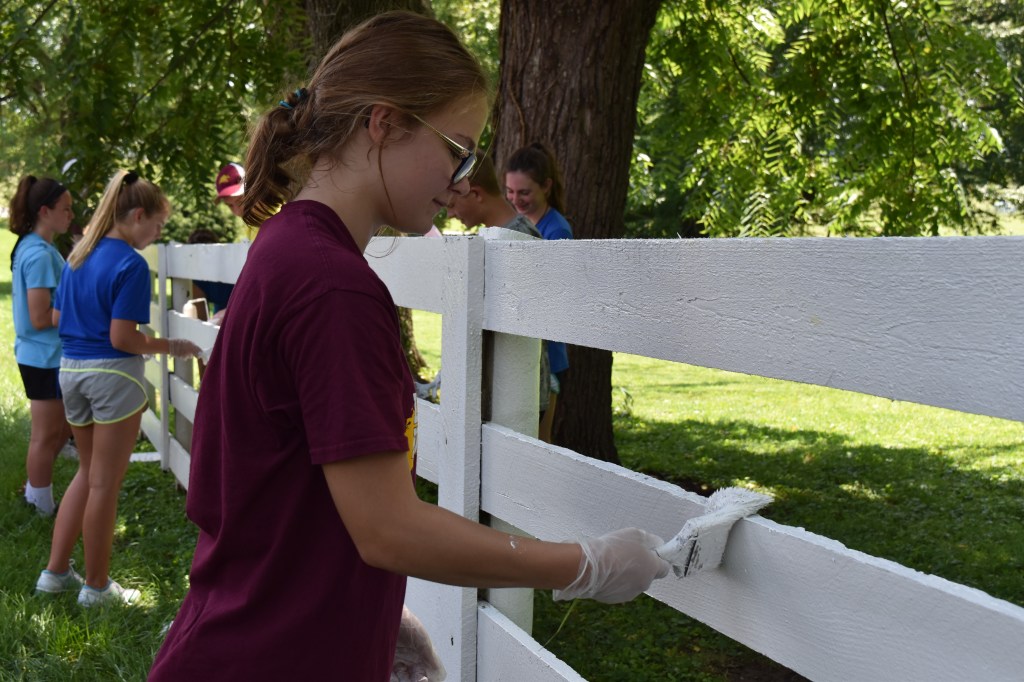 In the hot sun on July 18, a group of children from a youth group at First United Presbyterian Church in Le Roy, Illinois, gathered with buckets of white paint to paint a fence between the property of Wesley Village Senior Living and Asbury Theological Seminary property in Wilmore.
The youth group is called Landing and consists of 31 people, 26 of whom were high school-aged children. The fence painting service was part of The Student Life Mission Camp, which consisted of youth groups from different states around the country going to different areas to conduct mission work. Various youth groups, including Landing, stayed at Asbury University and served Jessamine County churches and service agencies.
The fence painting event was a collaboration between Asbury Theological Seminary and Wesley Village since both their properties were involved. The seminary repaired and powerwashed the fence prior to the children painting it, and Wesley Village provided the 25-gallon buckets of paint. The youth group brought brushes, rollers, pans and other supplies needed to paint the fence.
“It’s a great thing for the kids as far as the project they have, but it’s also a good thing for us to fellowship and work with Wesley Village,” said Brian U’Ren, director of facilities and security for Asbury Theological Seminary.
One of the leaders of the group who painted fences at Wesley Village, Kerri Cordray, said the children arrived at Asbury on Monday, July 15, and painted half of the fence Tuesday, met with residents of Wesley Village indoors on Wednesday because it was raining that day and finished the fence Thursday, July 18. They left the following day.
“It’s neat for them to see the completion of the process and to see their work being done, and several of the residents have come out and showed their appreciation for the work being done, and I think that’s a big thing, that we get to see the impact we’re having on the people that live here,” Cordray said.
Cordray said her focus was that the mission work and servicing the community was in service to God first because she believes the residents are God’s people, and she thinks meeting the residents made the children more passionate about painting the fence.
“That makes us that much more excited to come back and do the work because we got to see the faces that are living there and the impact that our work will have on their day-to-day lives,” she said.
Siblings Jalynn and Kyler Ford, who are 16 and 14, respectively, were two of the children painting the fence. Jalynn had never been on a mission trip before and was excited she had been available to go on one after Cordray asked her to come. Kyler had been part of the youth group for about four years and had done mission work before.
“I kind of thought it was going to be boring at first, but it’s turned out to be really fun,” Jalynn said about the fence painting.
She said she enjoyed meeting the residents and hearing what they thought about the fence painting project.
“You just got to talk to them and kind of figure out how much it meant to them, because a lot of them said that they have to look at it every day, and it was cool that it was getting redone,” Jalynn said.
Kyler said he liked interacting with the residents, hearing their stories and seeing their smiles.
“It was really cool how they shared their stories with us, and they weren’t really that shy, and it was really cool to see how they were — just had a smile on their face the whole time and didn’t really shy down from it,” he said.
Sydney Owens, 14, was another participant. It was her first mission trip. Meeting the residents, she said, allowed her to share her beliefs with them.
“It was fun to talk to them and see what they had to say about God and share the love of Jesus with them,” Owens said.
Alan Beuscher, vice president for community relations at Wesley Village, said having the children at Wesley Village got him a bit “choked up” because he usually works with seniors all day and doesn’t get to interact with children as much.