Days Gone By opens in Wilmore 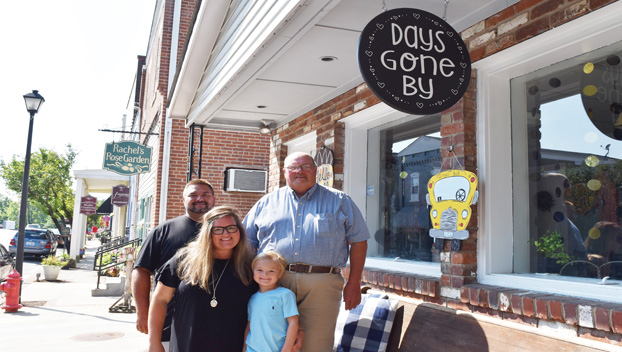 By Olivia Mohr
olivia.mohr@centralkynews.com
When Tiffany Mayhew was a child, she and her father, Andy Williams, went to antique shows in Burlington, Kentucky, and Lawrenceburg, Indiana. They packed furniture into an enclosed trailer to set up at antique shows, stayed overnight in cots and ate food they cooked over an open flame. Now, they’ve opened an antique and boutique shop together that they co-own in Wilmore.
Days Gone By, located at 308 E. Main Street, officially opens today, Aug. 1, and will celebrate with Facebook specials for customers.
Days Gone By opened for a trial period on July 18 for the last Wilmore Night Market so they could get to know the community and learn what times people typically shopped. The shop has been open since.
“It’s been wonderful,” Tiffany said. “The community’s been great. We’ve had so many people come in and tell us how much they love the store and can’t wait to see what else we bring in.”
Williams, Tiffany and her husband, Brennen Mayhew, all live in Nicholasville. They opened Days Gone By in Wilmore because of the development of small local shops in the downtown area and because there was an opening for the building.
The shop sells antique dishes, kitchenware, furniture, food items, handmade soap, clothing for women and children, door hanger paintings and other items. Prices range from $2.99 for a three-pack of honey sticks to $100 for their more expensive antique pieces like cabinets and other furniture items. The shop is open from 10 a.m. to 6 p.m. on Monday through Friday, 9 a.m. to 5 p.m. on Saturday and is closed on Sunday.
Brennen said his mother, Patti, who has a Facebook page called Patti’s Painting With a Purpose, paints the door hanger paintings sold at Days Gone By, and proceeds from purchases of the paintings go to his sister who has a heart condition. The Facebook page to benefit his sister is called Heartbeats for Brittany. Williams said antiques weren’t Brennen’s “cup of tea” before he became part of Tiffany’s family, but he has become more interested in antiques over time.
“Antiques — it’s not a standard thing — it’s the random things,” Brennen said about the variety of antiques.
Tiffany said in addition to the antiques, a few other unique things sold at the shop are items like bacon jam, deep-fried peanuts, reusable bamboo straws and diffuser bracelets. She also said since she has a 6-year-old son named Tyee, she wants to sell more clothes for boys in the shop because she said she’s noticed a lot of boutiques sell mostly girls’ clothing.
She and her father share a love for antiques, and for herself, she likes to collect green handle kitchen items that have green painted or enamel handles and wood pieces.
Williams said he likes to collect miniature oil lamps and old tobacco and coffee tins.
He said he enjoys going out traveling and finding antiques. He finds items at auctions and yard sales and also buys estates if people reach out to him if their loved ones have died and they don’t know what to do with their old things.
Williams said primitive pieces are getting hard to find, but the pieces always fascinate him. “They’re all unique, and none are ever built the same,” he said.
He said part of the reason he became interested in antiques was because his father was a furniture refinisher, and he watched him refinish pieces when he was growing up and he started refinishing furniture for people himself. He said he also likes antiques because he doesn’t believe modern furniture is built to last. On the other hand, if you buy something that’s already 200 years old, he said it’s going to stick around.
“Old stuff just fascinates me,” Williams said. “It always has.”
Because he enjoys public service and talking to people, Williams said he has loved interacting with customers at the shop.
He has been involved with youth sports leagues, has worked for Jessamine County fiscal court and also was a city commissioner for 13 and a half years in Nicholasville, so he’s used to talking to people a lot.
He is now retired and opening up an antique shop was his dream for after he retired after working for other people since the time he was 13.
“This is something that I wanted to do after I retired, was to be able to have a little shop, something of my own,” Williams said.
Now, he gets to share his love of antiques with his daughter and grandson, and he uses his time throughout the week to search for antiques.
On July 27, Catie Parsley looked around the shop and bought a few items. She said she loves the clothes and the antiques in the shop and wanted to check out the shop when she heard Tiffany had opened it.
Parsley said she’s excited to see how the business pans out for Tiffany.
“I know this is something she loves to do,” Parsley said. “She loves this sort of thing, so it’s exciting to watch her put her dream, I guess, into reality.”