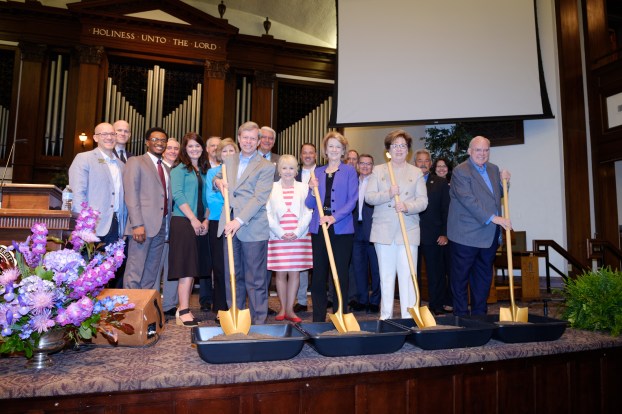 Asbury University moved forward in faith Saturday morning as constituents held a groundbreaking ceremony for the Collaborative Learning Center (CLC) during Reunion 2019.
Upon completion, the more than 50,000-square-foot building will house the Howard and Beverly Dayton School of Business and the School of Science, Health & Mathematics. The facility will include labs and classrooms, conference rooms, a sales training center, an entrepreneurial group work room, faculty offices, an atrium and auditorium and more.
A large gathering of alumni, faculty, staff, students and residents were present during the ceremonial groundbreaking which was held in Hughes Auditorium due to rain. The groundbreaking included Asbury President Sandra C. Gray, Chair of the Board of Trustees Larry Brown and Co-Chairs of the Ignited Campaign Steering Committee Dr. Walt and Rowena Shaw, among others.
“What a privilege and honor we have to be here today, celebrating God’s provision and symbolically breaking ground for a building that will have eternal significance in the lives of the students and those who pass through those doors,” said Dr. Mark Troyer, vice president for institutional advancement and strategic partnerships.
Troyer announced that the first floor of the CLC will be named in honor of Greg Isaacs, a former member of the Board of Trustees and campaign steering committee co-chair who passed away last year. The CLC atrium has been named in honor of Don Winslow, a former business professor who passed away in 1997.
Following the groundbreaking, the university will continue with construction as funds are pledged and received. Funding for the CLC is being generated through the Ignited Campaign, a six-year, $62-million initiative that began in 2014 and will reach completion in the summer of 2020.
“God struck a match and He fueled a fire in our hearts that’s been burning with great conviction that we must invest in our students at a new level to prepare the next generation of leaders to impact the world,” Gray said. “The Lord has ignited us to expand our influence and speak into the culture of this age, so we are eager to release more Asburians to business, science and the industries that are often void of Christian moral and ethical values.”
Alumni attending the groundbreaking received small, purple seed paper shovels that will become wildflowers when planted to symbolize the faith of the university in proceeding with the groundbreaking of the CLC.
“We do not have the cash in the bank to build the building we call the Collaborative Learning Center, but we see the need and we believe that the Lord is leading us and so we step forward,” Brown said during the ceremony. “Our theme for this weekend is ‘He is Faithful.’ We believe that the Lord will be faithful in fulfilling the need that lies before us financially so that we can live up to the mission of Asbury University, a Christian university in the liberal arts tradition for the purpose of academic excellence and spiritual vitality, so we step forward in faith and we invite you to step forward with us in that journey.”
The CLC is the latest of several building projects being rolled out by the university through the Ignited Campaign. Over the last several years, the university has completed the construction of Windsor Manor Guesthouse and the openings of Jameson Auditorium, the Bowdoin Athletic Practice Facility and the Joe Pitts Center for Public Policy. Ignited also funds scholarships, faculty development, academic programs, the revitalization of the student center and more.