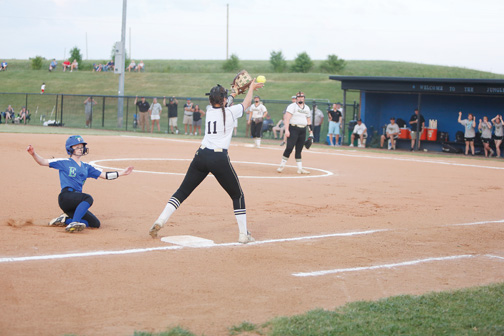 Boyle 4, East Jessamine 3
Keely Bowling hit a solo home run to left field in the sixth inning to lift Boyle over East Jessamine in a rematch of last year’s regional final.
Bowling went deep with one out in the inning off Kaylee Terral to complete the Rebels’ comeback from a 3-0 deficit.
Terral had retired the first seven Boyle batters and 10 of the first 11 before that homer.
Bowling followed with a double, and she scored on Kyndal Honaker’s single to right field. Honaker moved up to third base on the throw home, then scored when the throw back to third went into left field.
Bowling had two hits for Boyle, which totaled only five.
East Jessamine (21-9) had four hits, with half of them coming in its three-run second inning. The big blow for the Lady Jaguars was a two-out, three-run double by Allie Lane.
The Lady Jaguars got only one more hit the rest of the night off Chadwell, who struck out eight batters and walked six. Chadwell pitched out of a bases-loaded jam in the fifth inning and stranded nine East Jessamine runners in all. The Lady Jaguars got a leadoff walk in the seventh inning before she retired the next three batters.
Garrard 9, West Jessamine 6
Garrard prevailed in a slugfest with West Jessamine (11-17), rallying with six runs on eight hits over the fourth, fifth and sixth innings to secure their spot in the finals.
“It was a little tougher than we expected,” said Pozzuto, who hit a two-run home run in the sixth inning to cap Garrard’s comeback. “But every team that comes to the region, they’re always bringing their ‘A’ game, and every team has worked so hard to get where they are. It makes games a lot more interesting.”
The Lady Lions cranked out a total of 12 hits to defeat the Colts for the third time this season and reach the title game for the first time since 2016.
West Jessamine took a 5-3 lead on Olivia Bryant’s two-run home run in the third inning after each team scored three times in the first.
Garrard got one run back in the fourth on Fran Montgomery’s two-out triple, then scored three times in the fifth to regain the lead and added two insurance runs in the sixth.
Addison Pevley’s two-out, two-run single gave the Lady Lions a 6-5 lead in the fifth, and she later scored on Kyla Bell’s single.
Pozzuto padded the Lady Lions’ lead an inning later when her screaming line drive just cleared the fence in left-center field.
West Jessamine got eight hits off Perkins, who struck out seven batters with only one walk, but the Colts had only one hit after the third inning.

Colts grab lead in sixth inning for victory over Southwestern
The West Jessamine Colts snatched the lead late in the game in a 10-6 victory over Southwestern on Sunday.
In the top of the sixth Sarah Coffey doubled on the first pitch of the at bat, scoring one run.
Both pitching staffs had their hands full, frequently dealing with runners on base. The Colts collected 14 hits and Southwestern had six.
In the first inning, West got their offense started. Jessica Lewis drove in one when she singled.
Addie White earned the victory on the rubber for the Colts. She allowed six hits and six runs over seven innings, striking out eight.
Gwin took the loss for Southwestern. She surrendered ten runs on 14 hits over seven innings, striking out four and walking zero.
The Colts smacked one home run on the day. White went for the long ball in the third inning.
West racked up 14 hits in the game. Coffey, Lewis, Emily Woolums, Tori Giurgevich, and White all collected multiple hits for Colts. Coffey led Colts with three hits in four at bats.
Southwestern totaled six hits in the game. Gwin and Hines all managed multiple hits for Southwestern.

West Jessamine Colts baseball goes down on final play against Somerset
It came down to the last play, but the West Jessamine Colts were on the wrong end of an 8-6 defeat to Somerset on Saturday.
The game was tied at six with Somerset batting in the bottom of the seventh when RYan homered on a 3-1 count, scoring two runs.
West Jessamine collected five hits and Somerset had eight in the high-scoring affair.
Somerset got on the board in the first inning when Ham’s sac fly scored one run for Somerset.
The Colts tallied five runs in the third inning. The offensive onslaught came from by Ethan Davis and Jackson Green, a single by Preston Howard, and a double by Nathaniel Frank.
Acey was the winning pitcher for Somerset. He surrendered zero runs on one hit over four innings, striking out six and walking one. Grundy threw one-third of an inning in relief out of the bullpen.
Nathan Skipworth took the loss for West Jessamine Colts Varsity. He went one and two-thirds innings, allowing six runs on six hits.
Davis started the game for West Jessamine Colts Varsity. He lasted five innings, allowing two hits and two runs while striking out four Phipps started the game for Somerset. He surrendered six runs on four hits over two and two-thirds innings, striking out three
Howard led West Jessamine Colts Varsity with two hits in three at bats.