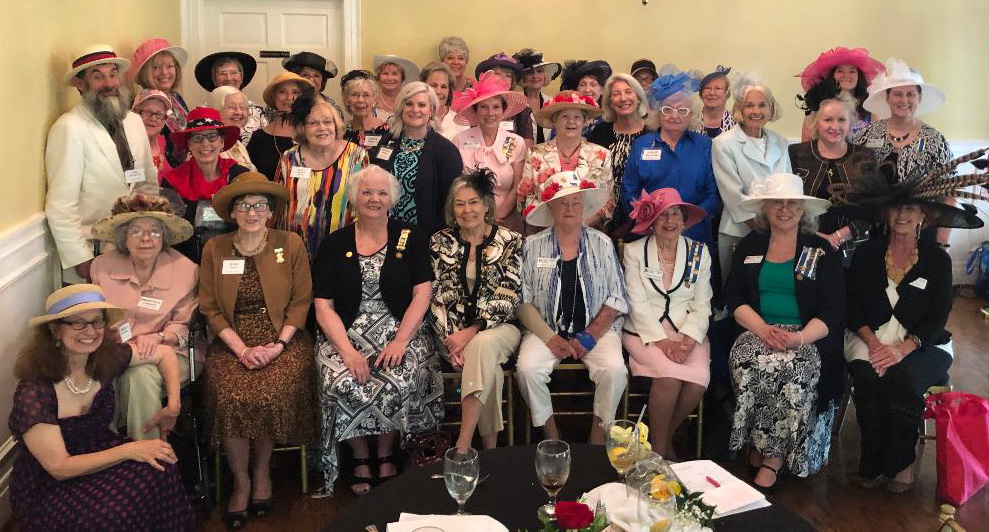 To celebrate the Kentucky Derby, Bryan Station Chapter DAR invited Bill Greely, Past President/CEO of Keeneland Association, to speak to the group Wednesday, May 1.  The chapter met at Equestrian Woods Clubhouse in Jessamine County.
Greely described meeting Queen Elizabeth and Prince Phillip, as well as other well-known figures who visited Keeneland.
He described the contributions of Alma Haggin, a woman who worked diligently to preserve the beauty of the site and his wife Norma Greely who established the Keeneland Gift Shop.
When the Kentucky Derby was first held at Churchill Downs in Louisville 137 years ago, hats were all the rage and regarded as an essential everyday accessory. At special events such as the horse races, women wore fancy and extravagant hats to broadcast their social status and show off their dazzling style. Men simply wore top hats. Over the years, this hat tradition continues to be a Kentucky Derby staple. Bryan Station Chapter ladies joined in the Derby celebration by wearing their Derby hats.
The chapter also conducted its annual memorial service to honor member Libby Polack who passed away in 2018.