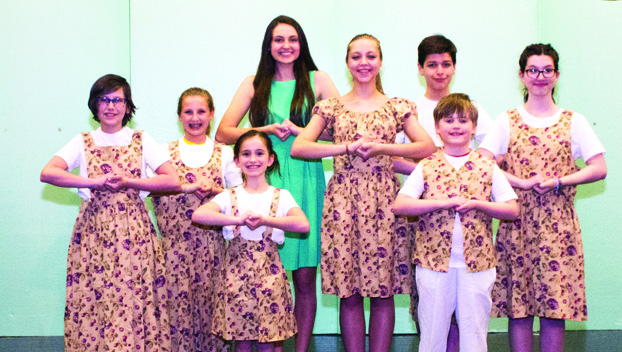 Rogers and Hammerstein classic comes to life next weekend

West Jessamine High School is bringing the classic “The Sound of Music” back to life next weekend with four performances for residents to attend, fall in love with all over again or experience for the first time.
Scheduled for 2 p.m. May 4-5, and 7 p.m. May 2-4, tickets are $12 for adults and $8 for students and seniors.
Tickets are available for purchase at the door at the WJHS auditorium at 2101 Wilmore Road, and cannot be purchased in advance.
“(Theatergoers can expect) beautiful singing, thoughtful storytelling, some laughs and maybe some tears,” Director Mary Christopher Grogan said. “Rodgers and Hammerstein are classic. ‘The Sound of Music’ is classic. I love that so many people are in love with theater right now because of Disney and movie musicals, but I wanted to return to the golden age, before all of that. Plus, it offers a wide range of roles for a number of people. It’s just a great show.”
The wide range of roles includes 41 people with 24 speaking roles and 17 chorus parts. There are also five children’s roles with actors from local elementary and junior high schools.
“I think that is kind of cool,” Grogan said. “Some have been in shows here (before). For example, Alex Brenner, who is the Captain was a lead in ‘Our Town’ this past fall. But Faith Osborne, who plays Maria, has never done a show before, ever.”
Osborne said playing her break out role as Maria in “The Sound of Music” is an honor and a privilege.
“It’s an amazing experience getting to play my dream role in my favorite movie alongside such a wonderful cast who share the same love for ‘The Sound of Music’ as I do,” Osborne said.
For Brenner, this production has succeeded in becoming the “most fun” he has had performing at WJHS to date.
“It has an extremely talented cast full of wonderful people,” Brenner said. “Every actor in this show has put in an unbelievable amount of work and I’m certain this show is sure to stun audiences. Please come and see what might be the best musical the West Jessamine High School Theatre has ever produced.”
For Hattie Jane Shoust, who plays Gretel Von Trapp, meeting new friends has been the highlight of the production.
“My favorite part of being a part of the show is meeting new friends and getting to spend time with them at each rehearsal,” Shoust said.
Actors have been rehearsing since February, when they were cast after two rounds of auditions.
As the high school’s last two performances were not musicals, Grogan said this production brings talent from across several schools in Jessamine County as well as Central Kentucky.
“That is the great thing about this show, you have kids who’ve done theatre since they were kids and some who this is their first attempt at it,” Grogan said. “I absolutely love that.”

By Anne Carmichael Jason Crumley has been a city carrier assistant for the United States Postal Service in the City... read more