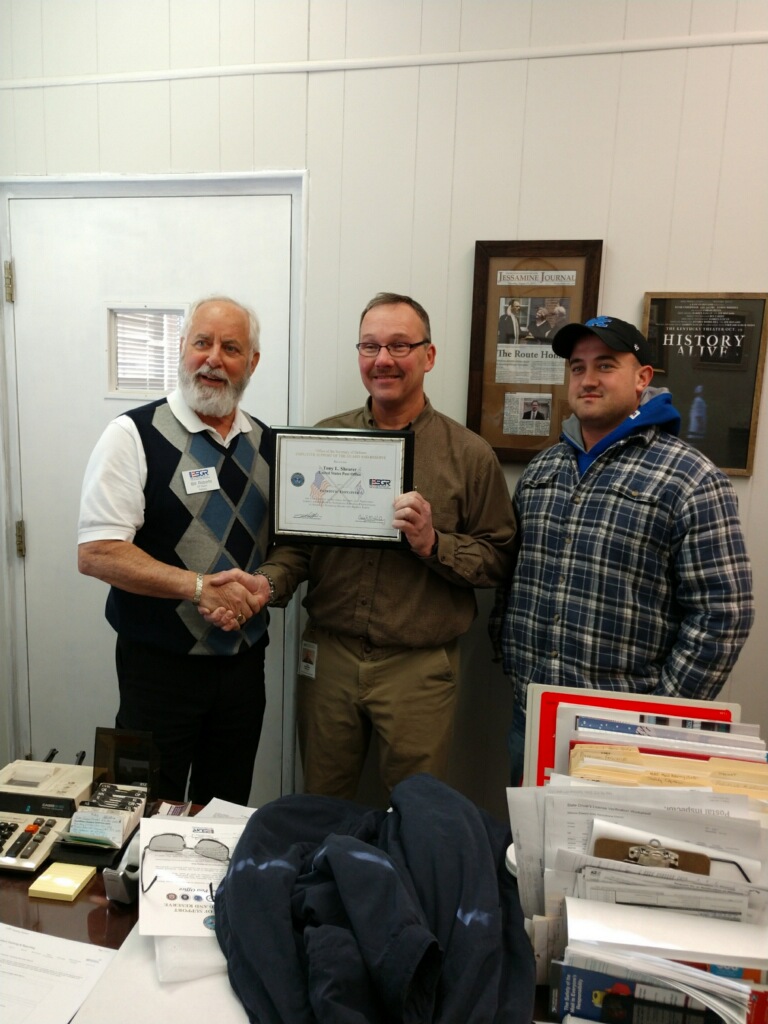 Jason Crumley has been a city carrier assistant for the United States Postal Service in the City of Wilmore for a little over a year and was recently nominated Postmaster Tony Shearer for the Patriot Award from the Employer Support of the Reserve and Guard for his support to Crumley’s National Guard service.
His “second job,” as he calls it, is as a guardsman for the National Guard. During the year that he’s worked for the Wilmore Postal Service, he has been away from his carrier duties for three months on assignment for the Guard. While many employers would consider that excessive absenteeism, and perhaps justification to terminate employment, the United States Postal Service and postmaster Tony Shearer have not only supported Crumley but have gone the extra mile to accommodate his drill schedule with the National Guard.
“Postmaster Shearer has not only accommodated my many requests for time off to meet my obligations to the guard, but he has been encouraging and has seen to it that my mail routes are delivered,” Crumley said. “He’s even done the route himself on occasion. He was in the service, so he knows how important it is to serve our country. Many of my co-workers have been in the service and they also help cover for me when I need to be away with the Guard.”
Crumley is assigned to the National Guard’s Fire Direction division, a logistic component of Artillery. He is often given extracurricular assignments on very short notice, which could require him to travel to Louisiana, Michigan or other parts of the country.
“I am married with one child,” Crumley said. “I need to know that when I have to drop everything and leave them, my civilian job is secure and that there is a team in place should they need anything in my absence. Tony Shearer has given me that sense of security and peace of mind to fulfill my responsibilities to my family, my jobs and my country.”
The Patriot Award is given to individual supervisors for support provided directly to the nominating service member and his or her family. The Patriot Award reflects the efforts made to support citizen warriors through a wide-range of measures including flexible schedules, time off prior to and after deployment, caring for families and granting leaves of absence if needed.
Shearer was pleasantly surprised when John Laughlin, awards committee chair for the Kentucky chapter of the employer support of the guard and reserve (ESGR), came to Wilmore to present the award and plaque, along with a letter of thanks for supporting Crumley’s duties in the Guard.
The ESGR has served the country for more than 45 years, fostering a culture in which employers support and value the employment and military service members of the National Guard and Reserve.
“It has meant so much to me and to my family to know that I have the support of my co-workers and Postmaster Shearer and that they not only support but encourage my efforts on behalf of my country,” Crumley said.

‘Try before you buy’