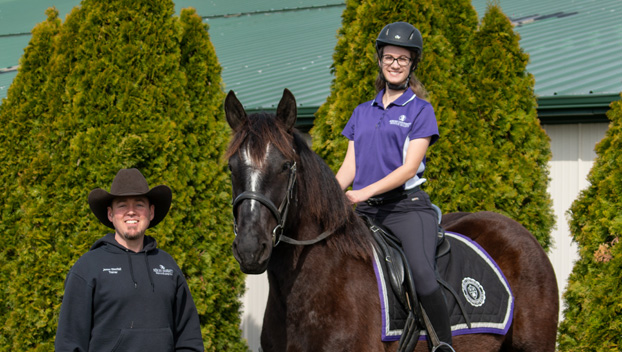 Through the love and care of Last Chance Corral, followed by Asbury’s Service Mounts Training Program, a once cast-off foal, Justice, has grown to become a capable police horse — and, just like his student trainer, he’s ready to impact the world.
Each year, hundreds of foals are taken away from their mothers and abandoned — an issue that has plagued the equine industry for years. Horses that will thrive in breeding or racing are highly sought after, leaving foals with less desirable “worth” to suffer as orphans.
In every seemingly hopeless situation though, hope remains. Through Asbury University’s renowned Equine Program, one of those foals — aptly named Justice — is beating the odds.
In 2016, internationally recognized horse trainers Stacy and Jesse Westfall visited Last Chance Corral, a horse rescue center in Athens, Ohio, that specializes in rescuing nurse mare foals and other neglected horses.
A nurse mare foal is a foal that was born so that its mother might come into milk. The milk is then used to nourish the foal of another mare, usually a thoroughbred that might succeed in the racing industry. The nurse mare foals are usually left to die as a result.
“I had been doing some work with Last Chance Corral and I got online to promote the website and foal adoptions,” Stacy said. “I saw a Spotted Appaloosa foal and thought, ‘I have to have it.’”
The foal in question was named Presto. When the time came for the Westfalls to adopt him, however, he was highly ill.
Due to his illness, Presto could only be adopted with another foal, who could give him the essential emotional support needed to help him recover. So, the Westfalls took a look around the paddock at Last Chance for a second horse to bring home.
“Immediately, I thought of taking one that would work for Asbury University’s Service Mounts Program to become a police horse someday,” Jesse said, who serves as the Asbury Trainer-in-Residence.
That second foal was Justice, who had been taken from his mother at three weeks old. The Westfalls spent the next few months raising Presto and Justice at their home with round-the-clock feedings. After being trained up by the Westfalls, Justice moved to Asbury’s 343-acre Equine Center to begin the next phase of his life.
In the fall of 2017, Justice was introduced to Rachel Darr, a student in the Service Mounts Training Program. Though he didn’t make the best first impression on his new trainer and was readily labeled the “ugly duckling” of the barn, it quickly became evident that God brought Darr and Justice together for a reason.
Over time, Darr and Justice created a special bond that helped Darr grow as a trainer and Justice progress rapidly in his training — a proven structure using riding, ground work, obstacles, street work and desensitization techniques to prepare horses for service in police units.
“We’re both really stubborn in personality and didn’t mix well for a long time and then last semester, I was like, ‘Okay, I’m going to start believing in you,’” Darr said. “Now we’re best friends and he’s really blossomed.”
Darr, a double major in equine studies and music who also happens to have Asperger’s Syndrome, struggled to connect with other children during her school years and found a special connection with horses when she began riding at age 12.
“The Asperger’s definitely affected me more when I was younger and just didn’t understand the world or people at all,” Darr said. “Horses, you don’t have to talk to or impress them. You can learn how to communicate really well with a horse without having to be good at communicating with people. That was always really cool to have that bond and to gain confidence riding them like it’s a partnership.”
As for the dynamic duo of Presto and Justice, they were reunited last year at the Equine Affaire event in Ohio.
“When we did that, it was really interesting because in my herd Presto is kind of the low man on the totem pole,” Stacy said. “Presto had started pushing Justice around the month before they separated from each other. As soon as we put Justice in, he turned and took one look at him and started pushing him around, which was really funny because it was such a contrast to what he does most of the time. You can see that they recognized each other but it wasn’t this super happy reunion. It was more like, ‘I’m going to tell you where to go.’”
Justice also reunited with Jesse’s horse Lucy, who came to Asbury for some demonstrations during the fall semester.
“I was out bridle-less, cantering around the indoor arena and Justice looked up and saw Lucy, who was his friend when he was a foal out in the pasture,” Jesse said. “He just took off to follow her. His ears perked up as soon as he got in the arena and recognized her. He hadn’t seen her in years.”
Now, Justice is finishing up his police horse training and is in the process of being purchased by Sergeant Sage Bourassa of the Placer County Sheriff’s Office in Auburn, California for Bourassa, whose personal and work animals are all rescues. Justice will not only become Bourassa’s police horse, but also her personal horse and, as she puts it, a part of her family.
“He’s going to have a home, not just a job,” Bourassa said. “Justice will be my main riding horse, so he won’t just do police work. I go horse camping and do trail rides all the time. I also do dressage on the side. He’s going to have a whole family and a personal life. We do a lot of kids’ fairs and patrols too. He’ll have a good life.”