Jaguars Advance to District Championship With 59-49 Win Over Colts 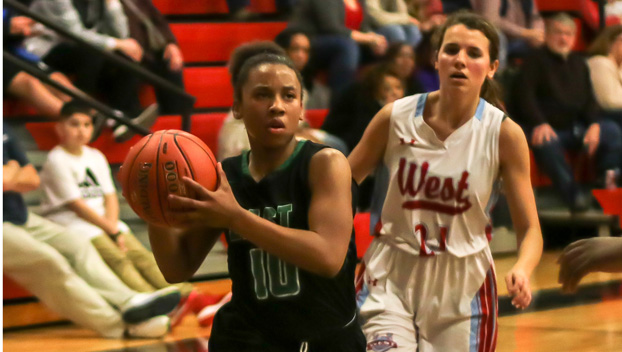 BURGIN-In the semi-finals for the 46th District Girls Basketball Tournament, East Jessamine faced rival West Jessamine for the chance to advance to the championship game.

The Jaguars were in control for much of the game, especially in the paint, and earned their shot at the finals, and went home with a 59-49 win.

The two teams took 124 shots, combined, and were virtually tied on field goal percentage (34.5% for West, 34.4% for East), but the Colts couldn’t sink the threes (3-18 on three-point attempts), and had trouble driving to the basket as the Jags clogged up the lanes. East sank eight treys on 22 attempts (36.4%), six of which belonged to Jasmine Atkerson.

Atkerson, the only senior on the East Jessamine roster, scored twenty points on 6-11 shooting (54.5%). Interestingly, every field-goal attempt she made was behind the arc; 18 of her 20 points were scored on three-pointers, the remaining two on free throws. Jermyra Christian finishing with ten points, Irma Hagins and Iesha Dean each had eight points, and Autumn Harrison had five. Kayden Robinson totaled four points, and Breeanna Crank and Jaila Yeast picked up two points, each.

The Jaguars’ quick, aggressive style also helped them dominate the boards, with the team combining for 63 rebounds. Dean pulled down an astounding 26 boards, on her own, with Robinson and Crank grabbing seven each, and Harrison ended the game with six. Five other players had at least three rebounds, each.

Coach Todd Claunch was effusive in his praise of his team’s performance, as a whole, and also appeared somewhat relieved that the night was coming to an end.

“I don’t know if it’s a youth thing, or if it’s a “me” thing,” he began, “or maybe it’s inexperience, but we tend to wait until it’s on the line, and then we say ‘OK, we’ve got to go now’. But once we get in that role…well, I’ve always called it a ‘feeding frenzy’, because once we get in that mode, then everybody’s in on it.”

“But we’ve gotta get in that mode. If we get in it too early, then we have a hard time getting back in it, late.”

“So tonight, they had me worried. I could tell we were a little tight. I cracked a little joke during that first time-out, just to try to get them to relax, you know? But they got in the groove.”

He added that his team was able to maintain their focus, as well as their intensity, til the end of the game. “But we just gotta finish free throws,” Coach Claunch continued.

“You take our season (as a whole), and it was a learning process from the beginning. We were on our way up; we won six out of our last seven games, so we were on a roll. We’re getting it, starting to feel it a little bit. And when you’ve got so many young players, sometimes they burn out when you hit mid-December or January. It’s a long season, you know.”

The East Jessamine coach was quick to point out the efforts of Atkerson, in his post-game comments. “Jasmine really stepped up. She set the school record with nine ‘threes’ in a game (January 22nd vs. Burgin), and before tonight she was 20th in the state in shooting percentage from the three-point line. She’s brought that effort on the boards, she’s brought it on defense. She’s just stepped it up all the way around.”

Coach Claunch had much to say about the Hagins sisters, in addition to many others. “Aimee comes to the court with that energy, every night. Irma’s confidence has built and built. And you take Jermyra (for instance). If you need something on the court, more times than not she finds a way to make it happen. Bree (Crank) has stepped it up, from beginning to end. Autumn (Harrison) has been huge on rebounding.”

When asked who he thought was his most-improved player of the year, Coach Claunch replied, “I don’t have just one that I could say ‘yeah, this is the one.’ It could be five or six different players. For example, Jaila Yeast came off the bench for us, when Autumn was out, and she knocked down some shots for us. Really, everybody’s done something for us.”

“You know, we always want to play at a high level. We’ve got a lot more work to do, but I’m extremely proud of them,” he concluded.

Coach Chris Begley was frank about the Colts’ performance, this night. “They wanted it a whole lot more than we did,” he began. “They came into the game playing a whole lot better than we did. They came off a long winning streak; we lost four or five in a row. Our senior (Madlynn McDonald) was hurt, sprained her thumb and couldn’t really get a feel out there. So that really hurt us. We just couldn’t score.”

“It’s a young roster. But so is theirs, too. Kudos to them; they just outplayed us.”

Coach Begley brought up the issue of late-season fatigue, a prominent concern when the playoffs come around. “I saw that we just hit a wall about four games ago. It’s a long season. They’re not used to practicing six days a week, and you’ve got thirty games on top of that. They just wore down.”

“But that’s not to take anything away from East. They played well, they were coached well. I give them all the credit in the world.”

“We didn’t beat ourselves. They beat us. They deserve the win.”

East Jessamine will move on to face the Mercer County Titans in the District Championship on February 22nd, also at Burgin High School. Game time is 6:30pm.