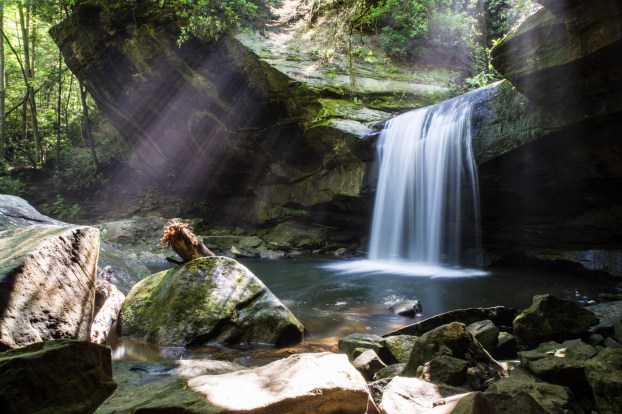 Jessamine County photographer Donald Perkins said his first exhibit, which is being presented this month at the John G. Irvin Art Gallery, offers gazers simplicity through nature from his time spent hiking and kayaking through Kentucky.

The exhibit will be shown through Dec. 28 at the gallery located in Central Bank, 300 W. Vine St. in downtown Lexington. A reception was hosted Nov. 16.

The exhibit is free and open to the public during the bank’s normal business hours.

Perkins said the theme is named after one of his photos, “Arcadia.”

“Arcadia is a place, real or imagined, offering simplicity, peace, quiet and contentment,” Perkins said. “In nature is where I like to find this, and I like capturing that feeling in my photos.

“I take pictures almost all the time of everything. Most of them end up being nature because that is where I like to spend most of my time.”

Hiking and kayaking have become regular activities for Perkins. Retiring 12 years ago, after working for IBM and Lexmark, Perkins said he began his professional photography career last year when he licensed his first pictures for use by The Jessamine Journal for the summer 2017 edition of the Jessamine Life magazine.

He has also licensed many of his photographs for use on the Jessamine County Health Department’s website, jessaminetrails.com.

Perkins said becoming a professional photographer was never his goal.

“A fellow flatwater kayaker was getting some incredible DSLR wildlife photos about five years ago, and that finally convinced me to get a new camera and get back into photography,” Perkins said. “I was happy just posting photos to Facebook, buying a new lens here and there and honing my skills for quite a while. It was mostly others that have given me some opportunities to either print, sell or exhibit some photos that I’ve been able to get to this point.”

Perkins enjoys the technical and artistic challenges presented by photography.

“I like going to places people have taken thousands of photos of and challenging myself to capture something a little different or capturing things people usually don’t get a lot of photos of — like some of the photos I can get from my kayak,” he said.

Every photo in the exhibit was taken within a two-hour drive of Jessamine County, Perkins said. One of his favorite subjects in nature is waterfalls.

“I often start with a three-second exposure and can sometimes end up with a 20 or 30 second exposure,” Perkins said. “It’s hard to predict which will work best, so I take many photos at different speeds.”

He said each waterfall is different, thus creating a different requirement for a good photo.

Perkins said he also enjoys photographing birds in flight. To catch the motion of the wings, Perkins said he uses a fast shutter speed to pause the action.

While Perkins has only been part of the professional photo business for a few years, he did not hesitate to share some insights for budding photographers.

“First of all, have fun and take lots of photos with whatever equipment you can afford,” Perkins said. “There can be a whole lot of technical details to learn about using cameras and photography, don’t even try to learn everything at once. Learn things as you need them (in order) to get the shot you want. Don’t hesitate to read about or experience art, architecture, landscaping, interior design, bonsai, calligraphy — any other art, craft or design topics you are also interested in. (This) can help you take better photographs. The important thing is to keep trying new things, developing your own style and constantly improving.”

In today’s age of digital photography, Perkins said taking more photos than seems necessary can be helpful in the editing stage.

“Vary something, either your composition, framing, angle, camera or lens setting, to give yourself several different photos of the same subject you can pick from later,” Perkins said. “Look at photos others are taking and see if you can see what sets the OK ones apart from the good ones. Start being critical of your own work in the same way.”

Scrivner, Adams weigh in on goals for upcoming school board term