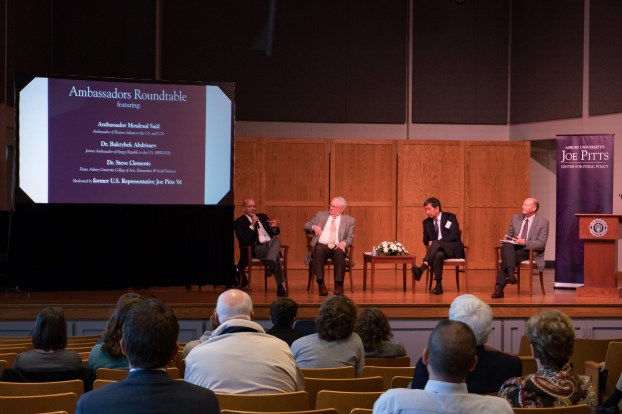 With a student body representing more than 40 countries, Asbury University recently sought to form a unique view on language and culture when the Joe Pitts Center for Public Policy hosted an ambassador roundtable last month with a comparative politics lecture for the student body and local community.

Former ambassador of the Kyrgyz Republic Dr. Baktybek Abdrisaev and the ambassador of Western Sahara to the U.S. and United Nations Mouloud Said were visitors to the university as part of the event.

“We often talk about how Asbury sends people to the far corners of the earth,” Dr. Steve Clements, dean of Asbury’s College of Arts and Sciences said during the roundtable discussion. “This afternoon, we have some folks with us who have deep roots in rather distant parts of the world, and they’ve come to share with us about their homelands.”

The Ambassadors Roundtable was hosted by Clements and former U.S. Rep. Joe Pitts. Guests who attended offered perspectives on education, interfaith efforts and maintaining diplomatic relationships during and after regime changes. Students and members also participated during the lecture by asking questions on topics which include policy, faith and international relations.

Abdrisaev and Said spoke at length about the intersection of faith, politics and advocacy during their time on campus.

“I came to this campus and saw that Asbury was a Christian university and it’s a really important mission,” Abdrisaev said while speaking about the importance of faith in the political world.

Said also took the time to speak in depth about the refugee camps in Western Sahara taking time to highlight the program for the students that was created through relationships with churches and host families from the U.S. and several European countries.

Said, Pitts and Abdrisaev all agreed on one thing: emphasizing politics has the ability to drive real change.

“When you develop friendships, then you can really work together,” Pitts said. “They open doors. [It] is very important to make relationships with people and host. Those things result in a lot of good.”

Clements and Pitts both said they are excited about several opportunities and partnerships which have been developing since the center’s opening last spring.

“It feels like we’ve got some new friendships now that can carry on into the future,” Clements said.

The center has also hosted several judges from the Kentucky Court of Appeals, who reportedly met on campus earlier this semester for oral arguments. A debate was also hosted during the event between candidates running for the senate seat in the student center.

The following events were announced Nov. 1 to Nov. 8 at the Jessamine County Public Library, located at 600 S.... read more