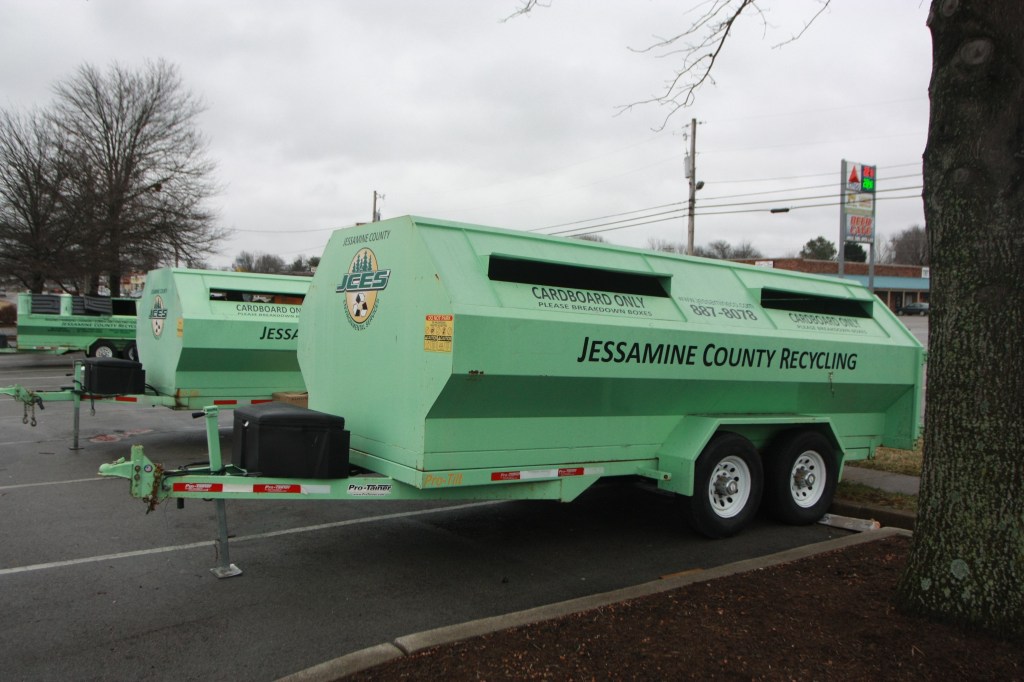 For years, Jessamine County has made money through its recycling program, until recently, when items being left at local recycling centers are now resulting in a charge to the county.

Some recycling sites are threatened to be eliminated in the county by the fiscal court because of illegal dumping. One threatened center is located at  Kroger on South Main Street, which could possibly be relocated to the Jessamine County Recycling Convenience Center at 123 Hendren Way.

Until recently, Jessamine County has been collecting items left at three centers located at Krogers on South Main Street and Bellerieve, as well as one location at Sam’s Club.

The county takes recycling to the Lexington Fayette County Recycling Center for single-stream recycling, where paper and plastics are then sorted. The center in Lexington sells the items it receives and Jessamine County receives a check for what its profits, minus a fee for sorting.

“We got a letter from Lexington Fayette Urban County Government that said if there are high contamination levels in loads they are going to start fining us above and beyond what is charged to sort it,” Judge-Executive David West said. “We used to get a check. Now we have to send a check. That seems to be a problem.”

According to West, in the 1980s about 3 percent of recycling was contaminated. Recently that number was reported as anywhere between 25 to 80 percent. Jessamine County’s contamination level is about 40 percent.

“I think some of it is lack of knowledge,” West said.

In recent years, West said the containers the county had at the local Walmart were asked to be moved and were eventually eliminated altogether. Kroger on South Main Street has recently remodeled its facility and has also asked the county to move the recycling when it holds its grand opening celebration later this year.

“(They have asked) when they are put back perhaps they can be serviced more often,” West said. “But we have four out there and three at other locations. That is 10 trips a day we are making already. It is quite possible the court will want to eliminate those out there and move them to the recycling center so at least our employees can have eyes on it.”

West said as long as the recycling is being done responsibly, it is much less labor intensive.

“Republic is partnering with our customers, including Jessamine County, to build better recycling education programs in order to preserve these programs,” Gregory Butler, manager of municipal services for Republic Service said. “We know residents want to be good recyclers, and we want to help. This includes sharing educational resources, such as this website dedicated to recycling education: recyclingsimplified.com.”

Recyclable items include: paper such as newspaper, envelopes, junk mail, phone books, brochures and magazines; plastics, including screw-top bottles and jugs; cardboard, including ream wrappers, file folders, poster board, cardboard boxes and milk cartons; metals, including aluminum beverage cans and food cans; glass, such as green, brown or clear bottles and jars. All recyclables must be empty, clean and dry.

“It is $10 for the dump. Fayette County charges $35,” West said. “Our rates are as low as anyone in the Bluegrass or far lower. People pull up there and whether they are full or not, they just throw it. We regularly get mattresses. Our guys pull up there and they have to spend an hour cleaning up and have a full load and then they haul a half-empty container back. We don’t want recycling to cost us a great deal of money.”

For more information and a list of what is recyclable visit republicservices.com