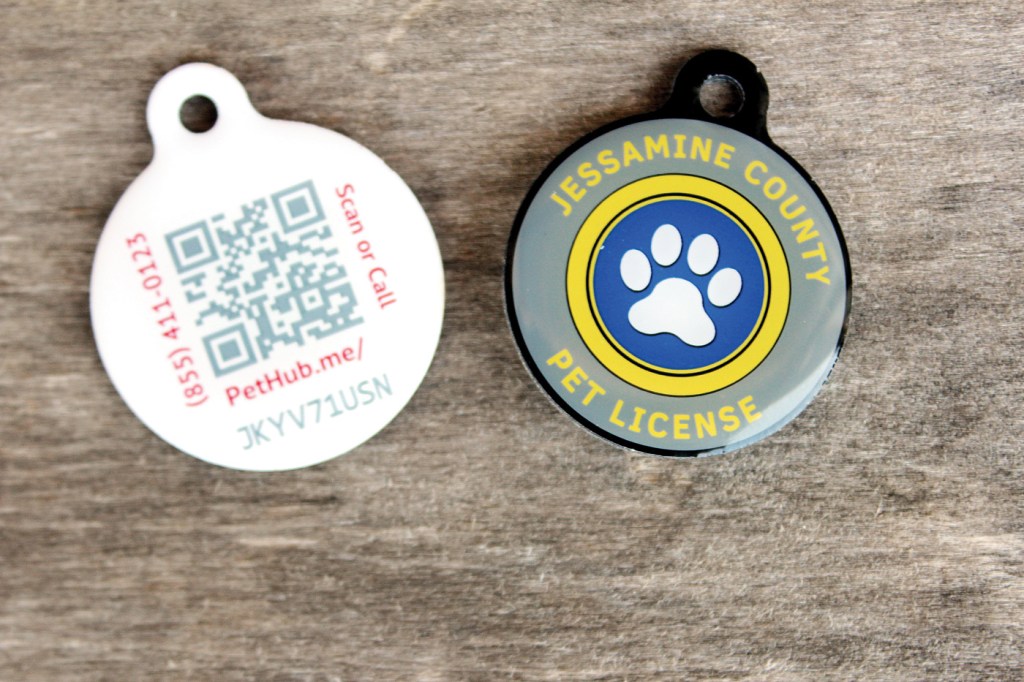 The ID tags promise to increase the chance of the animals return home to its owner while also helping reduce the number of animals who are taken to the local shelter.

“Ninety six percent of animals returned by PetHub are home in less than a day before they enter a shelter,” Frank Ruggiero, director of Animal Care and Control for Jessamine County, said. “That’s the kind of powerful tool we want to give pet parents in Jessamine County.”

In 2017, Ruggiero said 642 animals were picked up locally by animal control, and said if one of them had been wearing one of the new license tags two-thirds of them would have been returned to their owners without the need for animal control to be involved.

“The best thing about the new tags is that anyone who finds the animal can scan the QR code and get owners’ information before animal control has to take the animal to the shelter,” Ruggiero said.

“Over 2 billion is spent annually in the United States to provide food, critical care and safe beds to animals who are lost,” Tom Arnold founder of PetHub said in a prepared statement.

Arnold said PetHub’s goal is to get a lost dog home before it can become injured through fights with other animals or be taken away by a stranger.

“PetHub’s system links a physical ID tag to an animal’s online profile that can be accessed through an encrypted connection by anyone with a mobile device, whether a smartphone or standard cellular phone,” Arnold said.

“That profile can be updated free-of-charge at PetHub.com to allow the owner to list emergency contact information, including that of anyone who helps care for the animal, such as spouses, pet sitters, veterinarians, and other family and friends. Optional upgrades include ‘found pet’ alerts, GPS notifications, and a way to broadcast a missing pet’s profile to local shelters and businesses. Think ‘Amber alert,’ but for pets.”

Ruggiero said the service is available to all Jessamine County residents and tags can be purchased through PetHub for their dogs, cats or any other animals.

“There is no hang ups,” Ruggiero said. “(To help ensure a pet is not lost) animals should be microchipped to help reunite them with their owner.  Owners who have lost pets should file a lost animal report with Jessamine County Animal Care & Control. Owners should (also) use any social media available to post their lost pets picture.”

When pet parents decide to upgrade to the new PetHub premium service, Ruggiero said the company will donate a portion of the revenue back to the Jessamine County animal Care and Control which will in turn help the facility continue to offer critical care to animals in Jessamine County.

“Starting this month, anyone registering a new pet license through Jessamine County Animal Care & Control or it’s veterinary partners will receive the new digital ID tag that is powered by PetHub,” Ruggiero said. “We are incredibly excited to bring these new, durable, modern and effective pet ID tags into our community. Be responsible for your pets.  Obey the leash laws and ensure that fences and other means of containing canines are in good repair. If using tethers, make sure they are compliant with Jessamine County ordinances.”