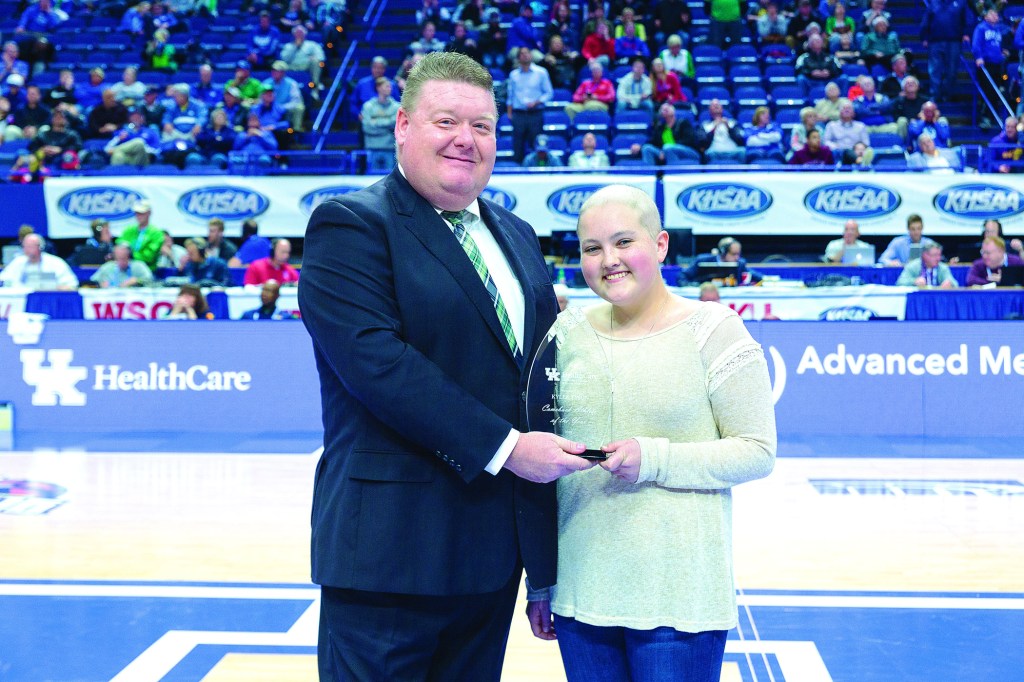 Kylee Tyson, a junior at East Jessamine High School, was recently awarded the 2018 UK Healthcare/Orthopedics and Sports Medicine Comeback Athlete of the Year for her fight against a rare form of leukemia which has only affected 26 adolescents in the world.

Kylee not only plays on the soccer team at EJHS, she is also the team captain and Junior Class President. Through it all, she has been through no matter what she said she would not let it stop her.

“I keep going, don’t let it stop me,” Kylee said. “I just go for it. I just keep a positive attitude about it.”

Diagnosed in February of 2016, Kylee’s mother Meredith Tyson, said they started noticing something was not right when a mass developed on Kylee’s face that January.

“They did a biopsy and everything was good, no cancer,” Meredith said. “Which is what why were concerned about. In February we noticed teenage acne on chest. Which she was 14-years-old, no big deal and we didn’t think anything of it until it started looking weird I was like mothers intuition, something is not right. We got into UK and her entire back was completely covered in lesions.”

Meredith said over three-to-four weeks her daughter underwent around 20 skin biopsies until she was finally diagnosed.

“It is in the white blood cells of the skin, not in blood or marrow. The National Cancer Institute had to do a final diagnosis.”

Although Kylee’s form of leukemia is so rare, Meredith said the doctors at the University of Kentucky are able to give her daughter the same treatment that she would receive anywhere else. Kylee’s oncologist works with doctors across the country which enables her to stay in Kentucky and in Jessamine County with her family and friends. Undergoing an aggressive treatment plan in May 2016, Kylee missed most of her sophomore year.

“In June 2016 the chemo was so aggressive it dropped all her counts,” Meredith said. “She developed a cold with a fever and was admitted to the hospital at the end June. We almost lost her in July when she developed a fungal infection which attached to her spleen, lungs, liver and muscles in her body. They couldn’t figure it out and couldn’t get it to go away. When we got out in August they said I can’t believe she is even leaving.  She was in really bad shape for quite a while.”

That aggressive treatment made it almost impossible for Kylee to attend school. In August 2016, Kylee began receiving house calls from teachers at EJHS when Sup. Matt Moore approved a plan where teachers would work with Kylee at home one-to-two hours in the evening so that she would not fall behind in her studies.

However, Kylee’s treatment plan is officially in maintenance and she is scheduled to finally be done receiving chemotherapy August 19, 2018.

“She has gotten stronger and played quite a bit this fall,” Meredith said. “ She has been playing off and on and is playing club. Friday she was diagnosed with the flu and we drove to Gatlinburg. She supported her team but did not play. She is starting to get her strength back.”

Even when treatment ends in August Meredith said Kylee will still have to deal with a lot of check-ups as there is no way to monitor her leukemia unless skin lesions start to appear again.

For Kylee, her plan is to throw a big party to celebrate.

“Kinda of a birthday celebration,” Meredith said. “She will be 17 in August. We have not gotten to do a lot for her last couple birthdays because she has been pretty sick. She has good days and bad days. She feels like she does not have a lot in common with a lot of her friends. It is hard to go and hang out and they are all having a pillow fight and she is getting sick. I am so proud of Kylee and the strong positive person she has been throughout her journey.  She lights up a room with her contagious smile even through all of the circumstances of her illness over the last two years.  I can’t wait until August when she completes her two and a half year treatment so she can enjoy, without illness, her senior year in high school.”