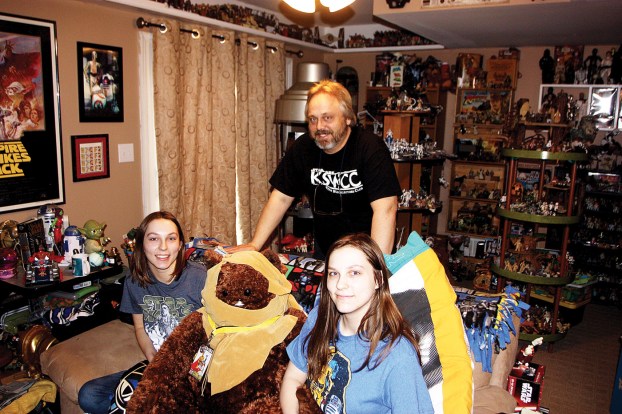 A collection of galactic proportions

The Force is strong with Miles Johnson.

The Warner Elementary art teacher has been collecting Star Wars items since the first film debuted in 1977.

From dozens of Wookie troops to collectible PEZ dispensers and even bowling balls, Johnson has a room in his house solely dedicated to his collection, filled to the brim with Star Wars-themed items and toys.

“I got to see Star Wars in 1977,” said Johnson. “Everybody was talking about it. I wasn’t really keen on going to it. I didn’t know what it was. After seeing it, the characters and story stayed in my brain forever. I was blessed with being 7 years old and growing up with the films from that point.”

His collection began when his parents bought him a C-3PO action figure the following year.

“It was so much fun to have him to play with and take everywhere. Back then, we didn’t have the opportunity to watch a theater release film six months later at home, so there was the desire to want to reenact the movie. What better way than to have toys to do it with?”

Johnson said his mother then bought him a framed Star Wars poster that became the central feature of his bedroom and continues to hang in his current collection.

“My favorite collectible, hands down are the 3.75-inch vintage figures. Complementing them were the playsets and vehicles. This was an excellent scale to play with and use your young imagination.”

Johnson is a member of the Kentucky Star Wars Collectors Club. Louisville and Ashland both host portions of the club, including the Lexington branch, which was started up years ago by Kevin Lentz, a high school teacher and Star Wars collector.

Johnson describes Lentz as his guru that he contacts every time he has a question about a toy. Johnson said he would travel with Lentz to countless places in and around Kentucky to discover new collectible items.

“The Kentucky Star Wars Collectors Club has displayed toys and memorabilia at many different places over the years,” Johnson said “We have been at libraries, stores, various community sponsored events, Comic-Con and movie theaters. My favorite personally is to set up at a movie premiere. People always like coming up and talking about toys they had growing up.”

Star Wars Collectors Clubs reach around the globe to different states, and even overseas.

“There are many opportunities to travel around the state, nationwide and out of the country,” Johnson said. “We have members that do that often. I would like to go to some overseas events after I retire someday.”

The KSWCC has around 80 members, Johnson said, but hundreds can end up at events when family and friends are brought along.

Along with the numerous members of the KSWCC, Johnson also loves to share his passion with his twin daughters, Rose and Ella, seniors at Lafayette High School. Neither have lost interest in collecting with their father.

“Star Wars, I associate with the relationship with my father, so when our friends kind of tease us about it, well, it means a lot to us,” Ella said.

“It was always something to bond with him over,” Rose said.

“Not a lot of parents get to do this stuff with their kids — their teens — that relationship is gone,” Johnson said.

Both Ella and Rose plan to continue collecting for years to come and already have started their own collections.

The majority of Johnson’s toys are out of the box and noticeably used. Some are placed in sets, others are displayed on reused soda displays that Johnson has recycled.

“Most people want to keep them in pristine condition, but they’re toys, they’re meant to be out of the box and played with,” Johnson said. “Star Wars will always be close to my heart no matter what.”